What A Way To Go 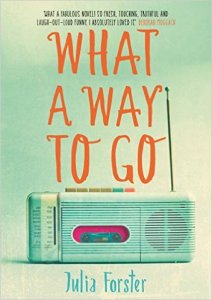 What a Way to Go

My year as a member of the Curtis Brown Book Group ends with a lovely story that I’m sure many of you will connect with. Set in 1988 it follows the life of twelve year old Harper Richardson as she navigates life with her mum Mary, and every other weekend with her dad Pete.

Life in Blackbrake is typical of a town in the 80s famous for ‘lager, lifts and loonies’, where the Dynamo Elevator Inc testing tower looms large over the houses while the inhabitants below carry on to the tune of neon pop while wearing legwarmers, high hair and shell suits. Dad’s mouldy old cottage in the village of Hardingstone is the old family home, where Harper spends her time in either the neglected graveyard or visiting elderly next-door neighbour Mrs Curtis.

She attends the Lone Rangers parties for single parent families when she’s with her dad; the rest of the time she spends with her best friend Cassie (often wandering the grounds of the Hopkin Wynne Mental Hospital, or the General Hospital if she’s alone) or with her ‘baby sitter’ Derek, a wannabe stylist to the stars.

The story revolves around Harper coming to terms with her life, trying to help her Dad move on and vetting prospective new step-dads in the hope that her Mum will be able to buy their rented house. When Kit turns up that box seems to be ticked, especially as he has a briefcase full of chocolate. It is poignant, funny, heartbreaking and uplifting – all at once. Julia has found a voice for Harper that is perfect for an almost thirteen year old (or I suspect that Harper actually found Julia the way characters often do). Her voice is littered with metaphors that will have you giggling; the kind that kids hear but often don’t completely understand and repeat in ways that make sense to them. She’s an intelligent young girl (more intelligent than perhaps she gives herself credit for), and the sparky intelligence leaks through the pages. This isn’t a condescending voice of how an adult thinks a twelve year old will see the world, it is a refreshing voice that rings true.

With the aim of completing another totally honest review I tried to pick apart the book as I read it. There a number of characters I would have liked to see more of (for example I would have loved Harper to have spent more time with her dad so we could get to know him a little bit more, especially at the end of the book) but if more time had been given to these characters the book wouldn’t have had as tight a storyline as it does – this is all about Harper after all. I would like to see more of Derek, but, should Julia feel inclined, I think he would quite happily jump off the page into his own book.

If you are looking for a book to spend your pennies on I would heartily recommend What a Way to Go. You will be immersed in the 1980s (if you were there at the time you will recognise everything, if to you the 80s is ancient history this will bring a little slice of it into your life), and have a capable guide in the form of a nearly-thirteen year old with a wise head on her shoulders and a quirky turn of phrase. It’s a lovely story, and one that deserves to be read.

← Scents Make Sense
Helping You To Help Yourself: Five Ways To Save You Money →