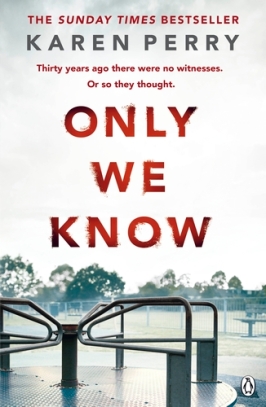 This week I’m reviewing one for the mystery lovers among you. Only We Know was written by Karen Gillece and Paul Perry, under the name Karen Perry, and is strange in that the book, to me, is both fast paced and slow at the same time. While you whizz through the book the mystery seems to unravel quickly before your eyes, gaining momentum as it goes; the languid heat of Kenya and the modern fast pace of Dublin create an undulating feel to the book, where time seems to slow while the story gathers pace.

This is the story of Nick, Katie and Luke, for whom life changes forever after a childish game goes horribly wrong. We pick up with Katie in 2013, now a Dublin reporter, as she prepares to interview Luke, who has become something of a celebrity businessman. Memories surface of their time in the Masai Mara in 1982. Something horrible happened, something that they vowed would stay between the two brothers and Katie, something that has haunted them for thirty years. As we get to know the brothers Nick and Luke, and Katie, we obtain glimpses into their past, but are thrown into an uncertain future as Luke goes missing in mysterious circumstances.

This isn’t your usual crime novel. We move between 1982 and 2013 as the relationship between the three unfolds. The way the children coped with what happened shaped their future, and an uneasy alliance between the three is the main theme of the book. We are also allowed into the life of the boys’ mother Sally, as she cements the scene and provides and anchor to the past.

The book deals wonderfully with the fact that, for anyone, one twist of fate can have life altering consequences. Children’s games can go wrong, adults can make bad choices, and secrets have a way of coming out into the open. I’m always wary of author collaborations in fiction, as I feel it can be difficult to obtain a coherent style, however Karen and Paul have managed to write a book that you would never know was written by two people. The voices are perfectly flawed and real, and the book flows in a way that draws you into the narrative easily.

This is definitely a book to curl up with on a weekend and read in one sitting if you can. The story will have you hooked and nothing is what it seems.

Only We Know by Karen Perry, published by Michael Joseph/Penguin December 3 2015