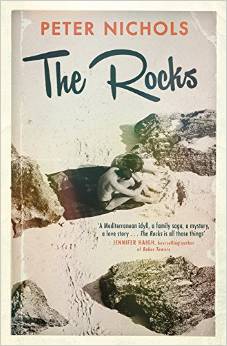 This week I have a review for you, another of my book club offerings.

The main story is set around The Rocks, a small hotel run by Lulu and inhabited by her regular guests, friends and hangers on – some more likeable that others. In the first pages we are introduced to Lulu Davenport, now in her ninth decade but with the countenance of a woman of much younger years, and Gerald Rutledge, the same age but for whom time has not been so kind. They were once married, for a very short time, and have spent the last fifty years avoiding each other; now it’s 1995 and they are about to die.

Peter Nichols has written a very clever book, although I have to admit to struggling with it for the first few chapters. You see, this book goes backwards. We are faced with Lulu and Gerald’s deaths, and then we work our way backwards through a family saga that leads us to the fateful few weeks in 1948 when they meet and fall in love. After flicking backwards and forwards a few times to remind myself who people were I finally settled into the book and ended up loving it. It’s a great way to tell a story, even though I was dubious to start with and wondered whether I would be tempted to read it from back to front. After talking with Peter during our online book group meeting we found out that he was never tempted to write the book in the conventional way, so I decided that I would read it the way it was intended… besides it would be difficult to read backwards with any degree of certainty.

Anyway, back to the story. Without giving away any spoilers, there is a family mystery which is the reason for Lulu and Gerald’s falling out, something that remains unspoken until the very end, but which has far reaching consequences for their families throughout the decades. The book hints at something catastrophic, but their beginning is the end of the book and we have to wait to see what happened. We meet Aegina and Luc, Gerald’s daughter and Lulu’s son, and eventually roll through their lives as well as their parents’ and get to understand their complex relationships. Really this just isn’t a story about Lulu and Gerald, but also it’s about their spouses and their children.

The novel is set in Mallorca, and not having been there since I was a child, I found Peter’s writing very evocative. It was almost as though I could smell the sea and the olive groves and feel the sun on my face (believe me, there was no sun as I read it in a Caithness June that felt like more like November). There is also a beautiful part set in Morocco which was a favourite chapter among my fellow book-clubbers.

While this book probably isn’t for everyone (there’s a fair amount of cursing and adult themes as well as the backwards moving story) I really enjoyed it and read it over two afternoons, which is something I don’t do very often. I genuinely couldn’t put the book down.

The Rocks is a love story, a mystery, a coming of age story and a family saga all wrapped up in blue skies, turquoise seas and a fragrant landscape. I highly recommend it.

You can buy it from Amazon, your local bookshop or any other online bookseller

← Are You Too Nice For Business?
Bookish Festivals for 2015 →