It’s not very often that a book gets me looking at oranges in a new way.

Well, oranges and apples, and computers, and society… and the British Museum.

Antonia Honeywell’s first novel, The Ship, had me gripped from the start. And it’s not something I was expecting 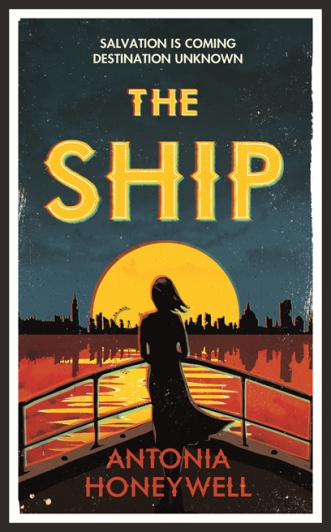 Set in a dystopian not-so-distant future, we meet Lalla Paul. She’s one of the privileged few at the end of the world; she has a home, an identity and parents who love her. The London of Lalla’s time has fallen apart, and while the world burns the population is strictly controlled. Without being registered you are nothing – you don’t exist. If you can’t produce your identity card you are dead, if you don’t re-register on time you get no food, if you stray from the path you will disappear. It’s a pretty bleak time as the Regent’s Park camps are bombed and the death toll is minimal – remember… the unregistered don’t exist.

But Lalla’s father has been working towards Utopia. On the eve of her sixteenth birthday his plans come to fruition, and a select group of 500 people board The Ship.

This is a novel about identity, truth and choice. We see the world through Lalla’s eyes, after all this future was built for her. But as her days on the ship spread out this is so much more than a coming of age story. Lalla’s life has been sheltered and, through this, food weaves subtly throughout the timeline. Don’t get me wrong, this is not a novel about food, but once you catch on to its significance it’s hard to ignore.

The Ship is a thought-provoking, claustrophobic novel. As I read, the world on the ship would shrink in on me, then suddenly expand to fill the horizon. I don’t think I’ve read a novel that has had such an impact on me for a long time. Most stories leave you with a sense of getting to know the characters and mourning their loss when you finish the book, The Ship had me questioning the characters and their motives long after I had finished reading. There was no time for mourning – they were too enigmatic for that.

This is not really the type of book I would usually read. I love thrillers, the classics and historical novels, spent years deeply enveloped in sci-fi and fantasy and have recently begun to have a sneaky appreciation of what others have labelled ‘chick-lit’ (even though I hate that term). But despite loving Justin Cronin’s The Passage (I have still to read The Twelve… it’s in my ‘to-read’ pile) I have rarely ventured into dystopian fiction. As I have grown older I have found it to be depressing. This book, however, was a revelation. Despite the fact that this book seems to be listed as Young Adult fiction, it is a thoroughly adult novel with so many layers a synopsis could come to resemble the ship itself.

Under the surface there is a disturbing atmosphere; claustrophobic, eternally grateful yet led by the blind faith of the ‘saved’.

The body of the story is the love of a child and a civilisation, and the naïve narration of a girl for whom The Ship was built.

Looking over it all is Anna, Lalla’s mother – an enigmatic figure who taught her daughter by visiting the British Museum and feeding her roast chicken on her birthday.

I defy anyone not to fall in love with this novel. It will have you questioning your future, and the motives of those around you. Would you, could you, be led by blind faith and live out your days in perfect isolation?

Antonia Honeywell has written a wonderful first novel. I look forward to seeing what she comes up with next.

You can read Antonia’s journey from draft to novel on her website.