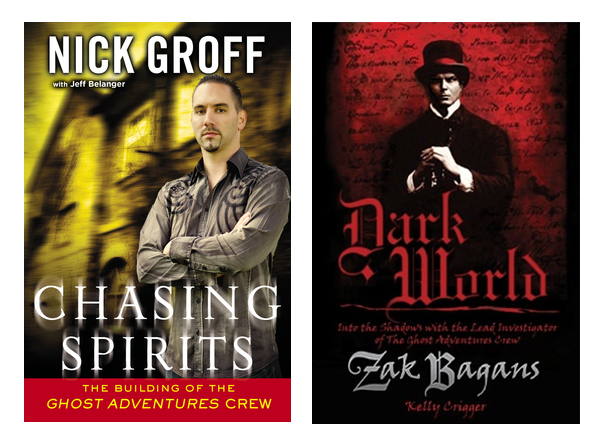 Dark Shadows: into the shadows with the lead investigator of the Ghost Adventures Crew by Zak Bagans (with Kelly Crigger), Victory Belt publishing, 2011.

While both of these books are interesting in their own right, both men have approached their subject in slightly different ways. Both work closely with a co-author, and while Jeff Belanger’s voice hides in the shadows you get the feeling that he was side-by-side working with Nick, nudging him here and there and helping with the quite detailed information boxes that shed light into the locations they have visited. Kelly Crigger, Zak’s co-author, hides in the shadows slightly more, in that I was left with the feeling that an old hand was guiding Zak through his writing. Of course I may be wrong. To me it seems that Nick has a natural writing “voice”, whereas Zak is a more “hands-on” personality, who perhaps finds it more difficult to feel at ease when writing.

Nick’s book is more of a biography, he take us steadily through his childhood, through to University, his love for film-making and his first meeting with Aaron Goodwin (Aaron…where’s your book??) There’s a school professor out there who deserves the gratitude of the followers of the GAC! We are also let into Nick’s private life, but never in an intrusive way, and follow the formation of the Ghost Adventures Crew and their rise to paranormal recognition. He matter of factly explains the dynamics of the crew, how they work and why they work so well. I like how he also explains why Zak is the front-man, and why his forceful nature can come across sometimes on screen as harsh. Nick is a thinker, not a talker, Aaron is the funny man (with a very serious side) and Zak is the “personality”. It all works and has evolved into a comfortable, close-knit group of friends doing what they love.

Through his book Nick lets us into his favourite cases, explains just what happened at Linda Vista Hospital and how it changed his perception of the paranormal, finally leading us through some of the equipment used in their investigations. Scattered throughout the book are text boxes containing answers to questions that he regularly gets asked by fans and information on his favourite locations. There are even a few black and white glossy photos, because we all like photos.

Zak’s book is less of a biography and more of an insight into his world and how the paranormal affects him. He takes us through the GAC investigations, addresses sceptics and helps you see things through his eyes. In the first section he opens with an admission from his childhood that I think is quite brave, there are many who will scoff perhaps, but hey, I believe you Zak, I’ve seen things others wouldn’t believe too. We then move through his childhood and onto meeting Nick and the formation of the GAC. We also learn about the apparition in has apartment… scary stuff. This all takes up a small amount of the book but sets the scene. I particularly like the Fast Facts about Zak page… addicted to history? Good lad, me too.

The rest of the book takes us through types of hauntings (including a chapter on orbs… a contentious issue among the paranormal community), equipment, provoking spirits, locations they’ve visited and the science of the paranormal. There are a few fun facts placed throughout the book, with photos scattered here and there. The final section is “The future” where Zak gives space to some of the “best people in the paranormal field” to air their views. Now this is where I come unstuck. It’s great to give others a voice, but in a book such as this I believe that the author should have the final say… and it just kind of … ends with the last “guest voice”. I found this to be a pretty unsatisfying end to a great book. Zak may have said all he wanted or needed to say, but I felt that the book petered out, and would have ended better with a concluding chapter from our man. Just something small, but enough to round off the book in a nice way. I felt it was a little like when music ends in a dissonant cadence… you’re waiting for that last note… but it never arrives.

Having said that, do not let it put you off the book. I’ve a great respect for the man, and I know he’d want it told like it is. This is just the way I feel about the ending. The rest of the book is great. 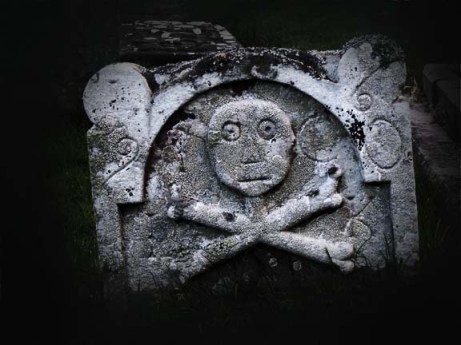 So how do both of the books read? I liked both of them, they will never be great literature, but they’re not supposed to be. Each in its own way makes the Ghost Adventures Crew accessible; you learn more about Nick’s life in his book, and you learn more about Zak’s perceptions of their paranormal life in his. They both come across as respectful and passionate, they know how lucky they are, but they also know that it’s hard work, and dangerous work, and that comes across too.

If you are a GAC fan you will love them both, if you are mildly interested I think both books will be worth your pennies too. If you are after a warts n all biography of Zak you may come away disappointed… he lets you into his head and his heart, not into his complete history, but you may be surprised at his sensitivity. You won’t get any sensationalism in either of these books, just good, honest narrative with a paranormal edge. For the sceptics out there… buy both of the books and make your own minds up.